I run.
Correction.
I jog a nice easy 10 minute mile (if I am lucky).
Point is. I get up, get on my shoes, my jogging bra (which I hate,) my shorts, or pants, or whatever, and I hit the streets.

Just today I was running. It's a short route around the Chautauqua grounds. 30 minutes max. But there are hills, and it gets my heart going. Nothing for a Tarahumara Indian, but I'm no Tarahumara Indian. (Check out Born To Run by Christopher McDougall.)

I am Naseem. Born in Chicago, raised 22 storys above the ground to parents who never ran, or coached teams, or watched sports (except for ABC's Wide World of Sports - "The thrill of victory, the agony of defeat....") I was an unathletic, "drink of water" that was always chosen last to be on any team. Let's see, Naseem or the kid on crutches. Naseem or the kid on crutches....

But then in college I started to run. I don't remember motivated me, But I soon discovered that though I may not be fast, I was at least steadfast. And more than that, I found that my lumberous jogs around towns, through forests, around lakes, made me feel pretty damn good.

It's all that dopamine and endorphins and stuff. Happy drugs snapping my synapsis to action.

The point is, I run, and today, after my run, I stopped at the amphitheater where, Paula Kerger, President and CEO of PBS was speaking. I stood there, all sweat covered and hyped up on endorphins and listened to her talk about PBS and community, and then she starts in about the history of the women's movement in the United States and up goes a three minute film about the first woman to run in the Boston Marathon, and suddenly it was not just sweat wetting my face.

I shouldn't, but do forget sometimes that women have had to fight for every scrap of power, recognition, and rights that they have today: to drive, to vote, to work outside the home, to divorce, to marry whom we want, to not marry, to go to school, to enter the profession that we choose, to have an abortion, to run in a marathon.

"The Pursuit of Happiness"

Late June.
The Pacific Crest Trail still with fog.
Quiet as sleep.
The charcoal and silver skeletons of an ancient forest reach into a woolen sky.
I rise before dawn.
Watch the sky lighten, the path lengthen, the dark spires of stone and bone take shape and form. 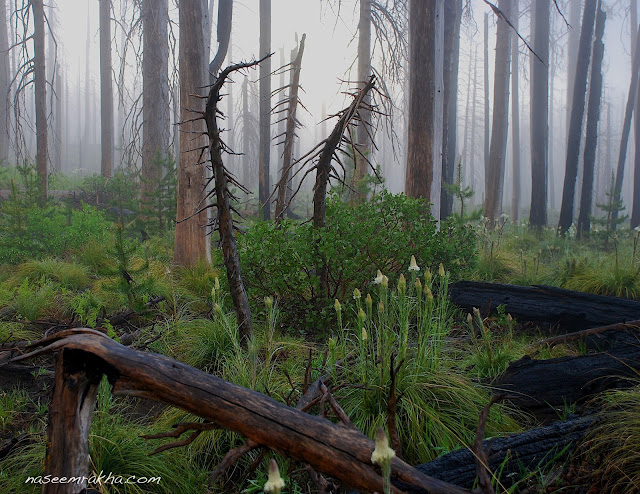 During this Chautauqua Institute week on "the pursuit of happiness," people spoke of the foundational requirements for a happy life.
Love, family, community involvement, physical well being, tradition, belonging, balance, meditation, prayer, learning, awareness....
But no one mentioned the trees.
The soil.
Catapulted arrays of lighting cleaving the night sky.
No one talked about the susurration of the forest. The melodies of the wrens. The brackish suck of delta mud.
To stand on the edge of a canyon. To spirit down a river. To lay ones aching body against a sun warmed stone, and melt into the space beyond existence.
No one talked about that deep connection we have to the earth, and how it is our first mother.
Born of it. Return to it.
Molecules reclaimed by planets and stars.
But I think of it.
And know it to be true.
Happiness rides on the tides.
Settles in the sand.
Seeps with the springs and slithers with the snakes.
Yes, even the snakes make me happy. 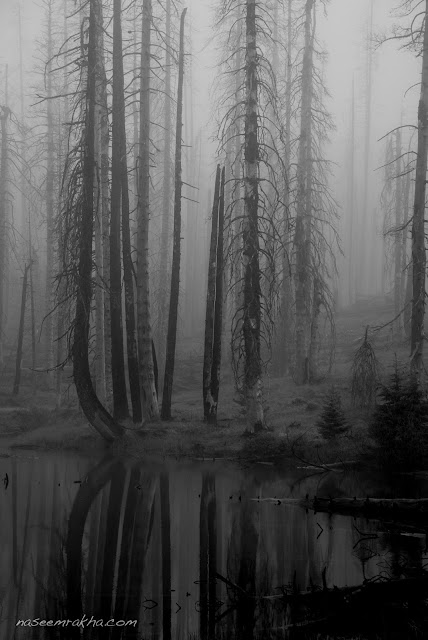 Late June.
The Pacific Crest Trail still with fog.
Quiet as sleep.
The charcoal and silver skeletons of an ancient forest reach into a woolen sky.
Reflect in the flat gray slate of a mountain lake.

I was in my parents’ car, my father driving home, my mother beside him, my four-year-old son and I in the back seat. It was rush hour, and it was a Chicago summer. Hot. Humid. Miserable. That was Mom's word—miserable. She often used it to describe how she felt. And in the car on that day she was suddenly feeling "miserable." Which meant, to me, only one thing: we would not stop at the Walgreens to pick up some things I hoped to get for my trip back home to Oregon. Instead, we would go straight back to my parent's house and Elijah would have to do without trail mix or crayons on the long flight west. I sighed.

I was not patient with my mom's miserableness. Not kind or sympathetic. My mom had been suffering with one ailment after another since I was twelve. Back then it was phlebitis, a potentially fatal blood clot was found buried in her lungs. I had come home from school to find no one home. A while later my dad called. "You have to be in charge," he told me. Which meant feeding my younger sister and brother, keeping the house clean, the clothes washed and folded and put away. It also meant explaining that Mom would be okay. She will be okay. Right Dad? Dad didn't know.

Mom did get okay. For a little while, at least. But then came the clots in her legs, then the ulcer that ended up eating up most her stomach, then the back problems which left her in the hospital for weeks on end in traction and on morphine. "The planes are flying so close to the window I can see the passengers. They have ashes on their face. Each one covered in ash." And then there were the falls, the anemia, and finally—the diabetes.

"Do you have your pills with you?" I asked. She didn't. "You're suppose to carry them with you." Chastising. Frustrated. Mean. Everything revolved around Mom and her health. Dad at her side. Retired from work, his new job was Mom. Blood sugar tests two, three times a day. Monitoring diet, monitoring blood pressure. Keeping records, logs. He had been an engineer. His new occupation kind of made sense.

I turned my attention back to my son. We were reading the book “Ferdinand the Bull.” It was a gift from my mom. Ferdinand is recruited to fight in the bull ring, an honor by all bull standards. But Ferdinand is not interested. He would rather spend his day out in the fields smelling the flowers. It's a predictable gift from a woman who was always pointing out the flowers, the sculptures, the clouds, the music. Born in Chicago to Catholic German immigrants, tailors with little education, she rejected a line of parent-approved suitors to marry a Muslim man from India. Her parents did not approve. Neither did his. They married in a court house, no parents in attendance. Within a year I was born and by the time I was five I was in ballet class. Seven, piano. Every month we went to the orchestra. When the Bolshoi came to town, we went, never mind if we really couldn't afford it.

I looked up from the book about the nonconformist bull. Something familiar was playing on the radio. As a child I would dance to it, scarves tied around my waste. Swirling color with me in the middle.

"What's that playing?" I asked.

She sounded tired. Exhausted. The long car ride. The traffic. The heat.

By the time we pulled into the driveway, my mom could barely get out of the car. "Low blood sugar," I said, and Dad told me to go find the pills. "The pills" were sugar pills. Super-sized Smarties that can jolt a diabetic back to life. We got her in the house. Put one in her mouth. Waited.

A few minutes later dad got her a glass of orange juice, another fast acting sugar fix. He held it for her as she drank. "I'm fine," she said to my dad. But she didn't sound fine. She sounded like a drunk. She tried to get up, couldn't. She pointed to the bathroom, and Dad took her there. A few minutes later he called for help. I stepped into the bathroom to find my father trying to hold my mother up. She had fallen off the toilet, her pants at her ankles. We lifted her up, I pulled up her pants. It was all happening fast. Too fast for me to understand that this was beyond low sugar. Too fast for me to think anything but “this isn't good.”

I had never seen Mom in a full blown diabetic attack. "Is this what happens?" I asked my dad. "Is this normal? Should we call her doctor?" He looked frightened. We laid her on the couch. My son stook at his Grandma's side.

Elijah is her only grandchild. She had been looking forward to our summer visit like a kid in a  countdown to Christmas. "Only one more month...Just two more weeks...Just five more days..." "Grandma?" Elijah said. "You better now, Grandma? No more miserable?" She smiled at her grandson, and that's when my father and I knew.

It was a hemorrhagic stroke, a catastrophic explosion deep in my mom's brain. If we had got her to the hospital sooner, turned around in the driveway perhaps. Better yet, had we raced to a hospital as soon as she said she didn't feel well. Paid attention. Had we listened. Asked questions....

"The bleed is massive," the doctor pointed to a scan. He laid out our options. Put in a drain, try to get out the blood. Or—do nothing. The drain may help, but it won't make my mom better. "Too much damage for that." Doing nothing would mean she would die, "in two or three days."

My sister arrived. My brother. Both of them driving halfway across the country in eighteen hours. Mom is in the hospital's hospice. Private room, big windows, quiet, plenty of space for the family to sit around the bed. Dab her lips, talk to her. See if there is any response. Anything at all. 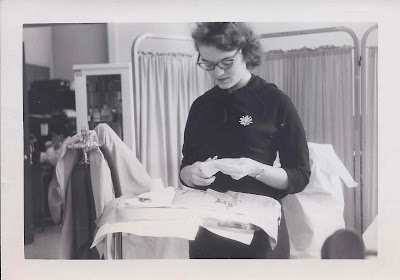 I think of this now as I sit on my porch in Chautauqua and listen to the Orchestra practice for this evening's performance of the Peer Gynt Suite. I didn't recognize it at first. But then the memory came. Not the one in the car, but the one in the living room, me dressed in my mom's scarves. My mom and dad came to Chautauqua with me once. They loved it. The music. The dance, the lectures about all the things they cared about. Society, culture, science, fairness, hope.

My dad moved to Portland shortly after my mom died. He is eighty-four years old now. During the day, when he is not watching the news, he is listening to KBPS, Portland's “All Classical” station. He listens to one piece after another, always waiting for Mom to tell him what is playing. "I wait and I wait," he says, "but she never comes."

Coda: My dear friend Joe just sent me this link to the Peer Gynt Suite. My mom would have loved to have been on this train.