What I Think About While Sitting on a Beach in Maui


My favorite picture of Hawaii can be found on Google Maps. I don't know how they did it, but somehow the satellite image shows the underwater topography of that island chain, and the story that image tells is amazing. 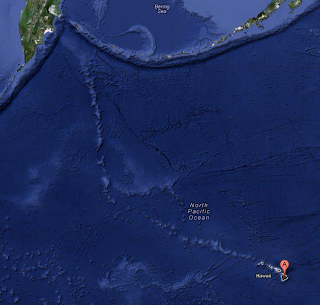 While most people consider Hawaii to be "paradise," looked at from a larger perspective we see the current islands are nothing but the most recent pearls on a strand that continues to form and then break. Tiny and temporary, each island is simply the spilt over contents of an overcooked Earth. Specifically an overcooked Pacific Plate.

Most volcanic chains occur where two plates meet. The Cascades, for example, are the product of the off shore Juan de Fuca plate slipping beneath the North American Plate (subduction). The compression, heat and friction caused by this action essentially melts away the crust. But that goo, like the chocolate bar that slipped between your car seats, has to go somewhere. Thus we have Mt. Lassen, Shasta, Mazama (the home of Crater Lake,) the Three Sisters, Jefferson, Hood, St Helens, Rainier and Baker - to name a few.

The 3700 mile Hawaiian Emperor Volcanic Chain (which includes the Midway Islands and runs all the way to the Aleutians) is different. Instead of it forming on the edge of a plate, it was created by the Pacific Plate riding over a "hot spot" beneath the Earth's mantle. Think of a plate of cheese slowly moved over a Bunsen Burner. Whatever section of plate that is over the burner will bubble up and eventually, as the plate moves on, cool. And that's exactly what the satellite image shows, the footprints of islands gone by.

In geologic time, all this island birthing and dying stuff happens pretty fast. Kauai, the oldest of the eight main Hawaiian islands, is just 5 million years old. Think Grand Canyon - its youngest layer of rocks (Kaibab Limestone) is 270 million years old. By that standard Kauai is still a baby. Nevertheless, the baby is dying. Its last eruption occurred about 1.4 million years ago which means the major island-shaping force on the "Garden Island" today is erosion. Give the place a million years, and it will be another in the long strand of submerged island pearls.

Not to worry, though. The Hawaiian Emperor Volcanic Chain is busy building itself a new island. Lō'ihi is located about 20 miles from the Big Island, and already has a 9000 foot tall mountain. Don't bother looking for it, though. Lō'ihi is still underwater. Geologists estimate it will poke its head above the ocean somewhere in the next 50,000 to 200,000 years. A blink of the eye - geo speaking. After that it is just a matter of simple biological succession - birds bringing in seeds, trade winds bringing in dust and polin, tides dumping debris. It won't be long after that that palm trees will be swaying and hippies will be selling pineapples and puka shell necklaces on the beach. "Paradise."

What is it? Apparently it is A Great American Secret. You would think it wouldn't be, given that millions of people around the country have gotten help from calling that number. Still, not many people know that if you are in trouble—say your house is being foreclosed, or you can't afford medicine, or you are afraid to take your daughter to the hospital because you don't have insurance, or you husband just died and left you and your kids with bupkis, or you don't have gas money to get to your job, or, or, or...... Or, maybe it's not you, but your neighbor. No electricity. No heat. No food. You don't know what to do. How to help. Well now you do.

Walk over to them, hand them your phone, and tell them to call 211. An operator will answer and link them with help. Just like 911, but this emergency is poverty.

I didn't know about 211 until my husband, Chuck, was asked to be in a film about the help line called American Winter. The show premiers tonight at 6 PM Eastern, 9 PM Pacific time on HBO and will continue to air at various times on HBO through April. (schedule) The film features eight Oregon families who made that phone call, and boy is it eye opening. Raw. Real. We see the courage of people facing situations they never thought they'd face.

And that—their shock, surprise, shame and strength—is what makes American Winter such a powerful film. These people did not see poverty coming, did not notice the out of control economy rounding the bend. And when they did, they certainly didn't expect it to run right over their lives, just like it did millions of others.

American Winter puts a face on this problem, and gives pause to the ludicrous lies that are coming out of congress.

Don't believe me? Watch this. It's stunning.

And so, American Winter. You can watch it tonight. Or you can watch it anytime on HBOGO. Or you can buy the film and show it at your church, or book group, or senior center, or have it playing at the bar, share it on Facebook, but turn it on and let people know.