The Canyon is Opening (UPDATE)


Arizona Governor Jan Brewer just announced she has reached a deal with the Federal Government, and Grand Canyon National Park will reopen tomorrow. As part of the agreement, the state of Arizona will pay $651,000 to cover the costs of keeping the canyon open for one week. Fingers are crossed that the Federal shutdown will actually end within the next 48 hours. In that case, the bill will be less. Utah is also opening its parks.

There are many questions, though. For example:
What time tomorrow will the gates be unlocked and visitors allowed to pass through? (They opened the gates early - maybe 7 am.)
Will all hotels, restaurants, paths, and waysides be open? (Everything is open)
Will the Colorado river be open to river runners? (yes)
Will past permits be honored, and how? (Not sure yet.)
Will all staff be back at work? (Seems so)

So far, I have heard no answers to these questions.

In the mean time, I am feeling very lucky to have had the experience of being inside the wall. I have met so many good people, had so many interesting conversations. I was busy preparing an article about it for the Guardian, but I am scrapping that now. The canyon is opening, so soon its closure will be old news.

Still, I will always remember tonight's walk. I went to Mather Point—probably one of the most popular places on the South Rim. It is rarely without visitors. Even in February, when it was -13 degrees out,  there were people standing on that point of rock pointing and gapping at all they could see. But tonight there was no one, and the sun was setting and the evening was absolutely silent.  Intensely silent. So silent I could feel it press itself against my skin, cup my ears. And I thought to myself, I will never be back here. Not like this. This, right now, is a singular moment, and I am honored to have been a witness. Very, very honored. 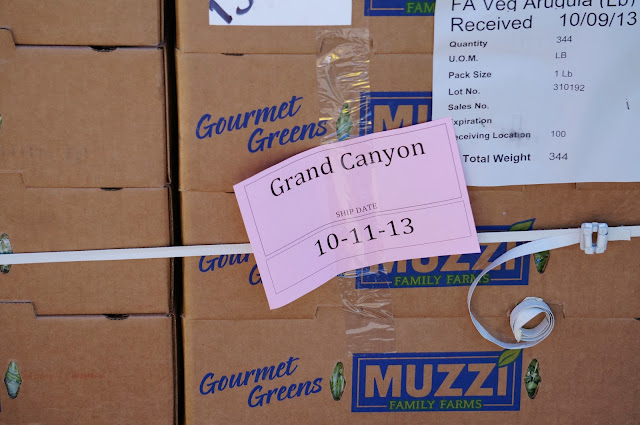 What people have asked me to tell you is that they want to work. Many of the employees here at the Grand Canyon have been here for decades. This is their home. Many of these same employees live paycheck to paycheck, earning just above Arizona's minimum wage of $7.80 an hour. They have no transportation to leave the Grand Canyon, and no money for gas if they did. They just want to work.

What people have asked me to tell you is that they will survive, but it is hard. Many people live in dorms, and have no access to a kitchen. Winter is on its way, and there is no money for heat. Many people have children. Grand Canyon is the only National Park that has a preschool, elementary school, middle school and high school. Three hundred twenty-eight students in all.

What people have asked me to tell you is that they are a community, and though they are helping one another, they are suffering. Some talked of depression. Drinking. Staying in bed all day. They don't know what to do. Where to go. How to get there. 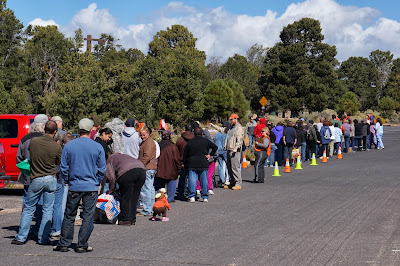 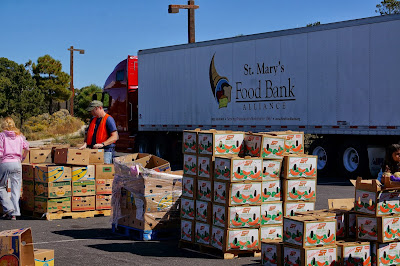 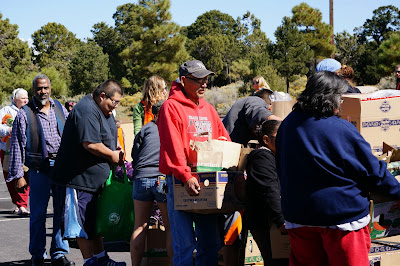 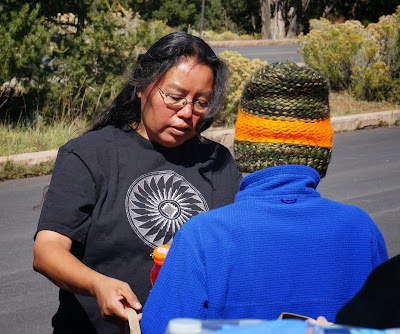 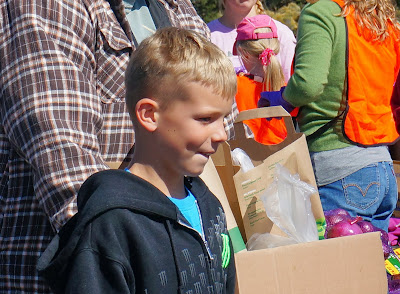 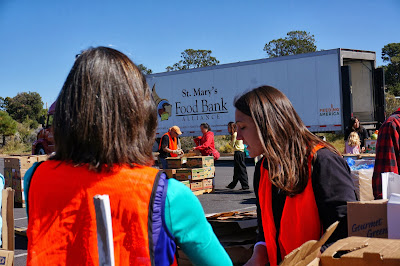 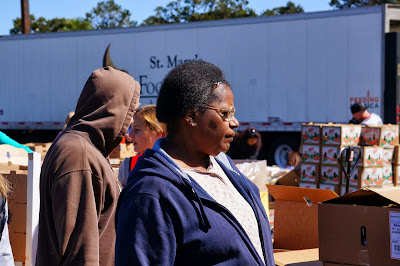 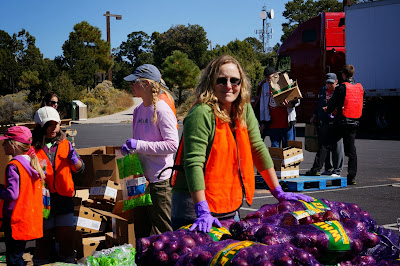 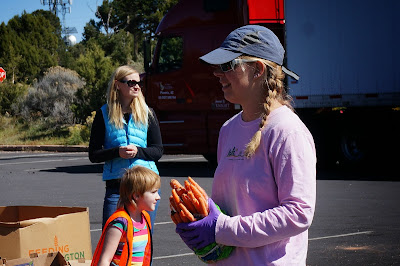 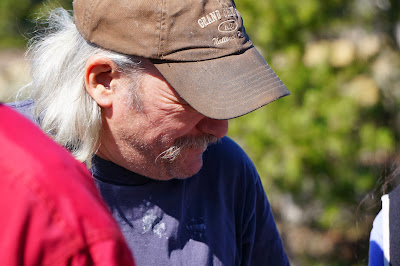 Posted by Naseem Rakha at 2:33 PM No comments:


Woke to snow.
Three, maybe four inches.
I dress. Go out.
And a coyote walks across my path
And an elk brushes his rack against a tree
And a rabbit skitters under a bush.

I stop and look at its tracks.
Move on.
At the rim a raven lands on a ledge. Snaps its beak. Caws.
Then jumps from its perch and glides into the canyon,
Disappearing into blue-cold clouds.
Just the sound of his call
remaining.

Naseem Rakha October 10, 2013
Naseem is visiting friends and teaching at the Grand Canyon during the Government Shutdown

Inside Grand Canyon National Park the wind is blowing. It whips through trees, rattles leaves, blows grit across the paths. Empty paths. Empty silent paths, except for the moan of the wind and the caw of an occasional raven. The chatter of a squirrel.

I sit on a rock at Mather Point when the squirrel approaches. He's wary at first, then bold. Very bold, climbing up my leg and checking out my pockets. But there is nothing in my pockets. "I'm sorry," I say. He sits back on my leg and stares at me, head tilted to the side. He looks puzzled. Not just about my empty pockets—why have pockets if not to stuff them with trail mix? This squirrel wants to know where all the pocketed-people are."Tell me," his little brown eyes ask. "Where did they go?"

Mather Point is usually bustling with people. They come from all over the world. Busloads of them. Each wanting their photo taken beside the great grand abyss.

I try explaining. "Congress," I say to the squirrel. A showdown that led to a shutdown. Fools. Damn fools. Positioning and posturing. Yesterday, I tell him, I watched one of those Jimmy Kimmel routines (see below.) He's a comedian. He asked people which they favor: Obamacare or the Affordable Care Act. The ACA, dubbed Obamacare by the right, came out way ahead. "Obamacare? That's just socialism," one person said.

Yeah, well so is the farm bill. I told this squirrel. And corporate tax loop holes. And mortgage deductions. And the public library, not to mention each and every fire department. Big fricking deal. We live in a society, and whether the bible-thumping teapot-toting air heads like it or not, we are our brothers keepers. And so yes, Obamacare was passed into law, and yes it is helping insure people who were uninsured, and yes that helps the country. Yes. Yes and yes.

But no. I told he squirrel. Don't expect to see the crowds back for a while. Egos rule. In the mean time, the country holds its breath.

The squirrel seems to get my drift. No trail mix. Not now, probably not for quite a while. He gives me a wistful look, then takes off, down my leg and across the rocks to sit on the rim of the canyon, and just stare out at the empty space that lies between the rock walls.


-Naseem Rakha 10-9-2013
At the Grand Canyon during closure, visiting with friends and gathering stories

I arrived at the South Gate of Grand Canyon just as a protest began. Business owners and employees from the town of Tusayan, park concession staff, and tourists gathered at the gate to hear why park Superintendent Dave Uberuaga is not able to re-open the park. 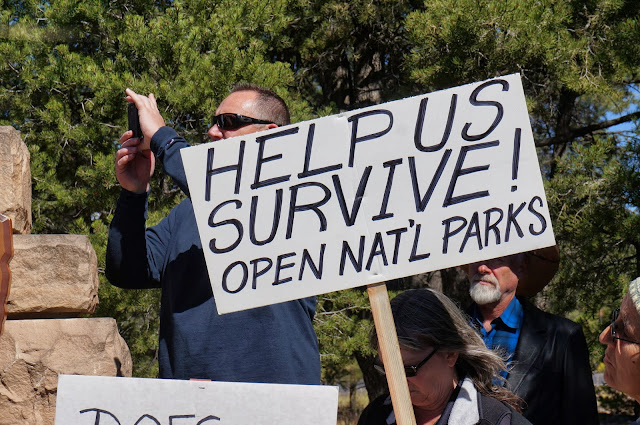 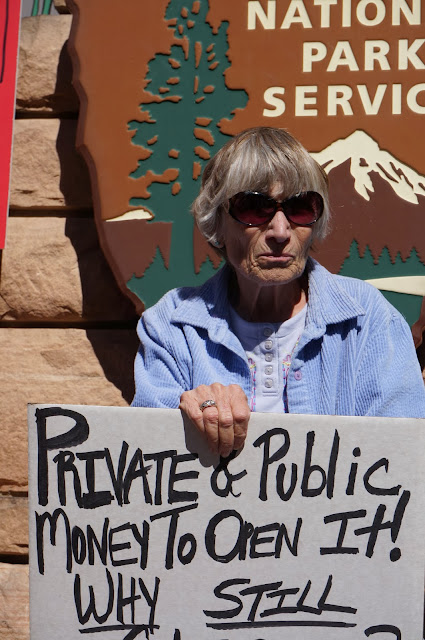 Posted by Naseem Rakha at 12:14 AM No comments: