Daring Adventure or Nothing 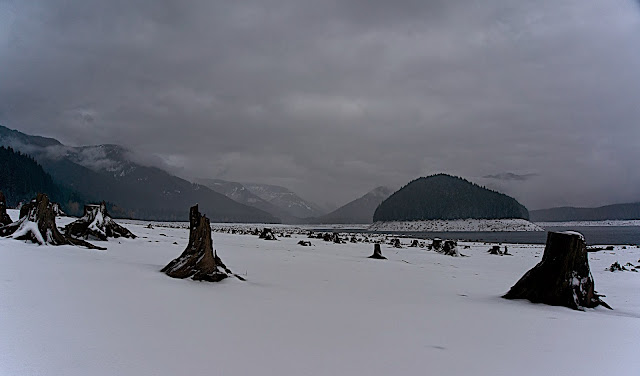 Oregon's first winter storm was predicted to hit yesterday, and I swear you'd think the sky was falling. Portland metro newscasters pulled out all their doomsday-ware: "Up to the minute Doppler Radar," webcams of soon-to-be-snow covered streets, lists of school closures and delays, and a scroll of Tweets about the storm. Their overall message: Don't panic. Stay home. Everything will be all right.

But I had my doubts about their predictions. My thermometer had settled at 37 degrees. This rain was not going to morph to snow, not where I lived at least, and probably not in Portland either. (It didn't.) So my dog Waldo and I got in my car and headed up to the mountains where I was certain I would actually see snow, not just hear rowdy rumors of its coming. I had promised myself early this fall that I would get out into the wild every week, no matter the weather. I find that there is no better cleansing then a good hike, and my goal is explore a new place each time. A new path, a new river, a new refuge. A new challenge. After a day out, I come home feeling ready to take on another fraught week of dealing the double whammy of menopause coupled with raising a hormonal teen.

So, I got in my car, and headed east up towards the Cascade mountains, and there, not far up the Santiam canyon, I found what I was looking for. Big fat flakes falling from a felt-gray sky. Pillowy clouds nestled on the shoulders of the foothills. Douglas-firs dusted like Christmas cookies. I followed the North Santiam River up to Detroit Lake, a summertime recreation area, where sailboats and jet skis slice wakes in a deep green reservoir created when the Corp of Engineers dammed the North Santiam in 1953.

In winter, though, the 455,000 acre-foot lake is drained to make room for snow melt and runoff. In other words, instead of a reservoir, what one can see at Detroit Lake now is the old channel of the North Santiam river, and the remnants of a forest that once stood at its side. It's a surreal landscape of still water and old growth stumps poking through the freezing earth like tombstones.

Waldo and I got out from the car and hiked down to this former forest, big, wind-driven flakes flattening themselves to the ground. We watched a White Tailed Kite skim the shoreline, deers huddle in a protected cove, a solitary coyote dart into the woods. After a while, the snow changed to sleet and ice began to seal our footprints. Back at the car, I poured myself tea from my battered old Stanley Thermos, gave Waldo a biscuit and we sat in the steamy vehicle listening to sleet pelt the roof: warm, comfortable, satisfied.

The day had not all gone perfectly. Before the lake hike, Waldo and I tried to get to the Stahlman Trailhead. It's located three and a half miles up Blowout Road, which is two and a half miles east of the town of Detroit. The road had not been plowed, and I did not bother putting on my chains, counting on my 4WD to get me through the six inches of wet snow. When I got to the trailhead, I tried to turn the car around so that it would be easier to leave after my hike, but my car lost its footing and began to slide sideways toward a ditch. Now I was blocking the one-lane road, and no matter what I did to try to go forward, I only made my situation worse. Finally, I got out the chains and was in the process of trying to get them on my back tires when two pick ups pulled up and out popped what I have to describe as two rather sketchy looking characters: middle aged men with long oily hair, battered beards, battered trucks, each one with a well equipped gun rack.

They approached my car and sized up the situation. Me. My over friendly dog. My sideways car. All of us far from anywhere. And then they told me to forget about the chains. "Get in the car," one of them said. "We'll get you out." And they did, each one planting themselves in the snowy ditch and pushing the rear end of my vehicle while I gingerly touched the gas and slowly moved forward. Their names were Rick and Rich, and afterwards we talked about the weather and the hills and the hike they'd just been on. I offered them tea, and they said sure, and we shared the cup from my thermos. "We saw a gray fox," Rick said. Their hair not oily but wet from being out in this storm. Out in this snow and cold. Out in this world.

It's true, I know, I would have been safer if I stayed home. I could have worked on my novel. Washed some clothes. Read. I passed a jack-knifed semi on the way back home, and two cars planted deep in a ditch. I certainly would have been safer had I not gone up that road, and into that snow and ice—no doubt about it. But there is no way I would ever have been as satisfied.

Helen Keller once said, "Life is either a daring adventure, or it's nothing." And while my adventures may not be all that daring compared the things you see on Youtube, or read about in one of Jon Krakauer's book, they are a hell of a lot better than nothing.