The Road to Manzanar 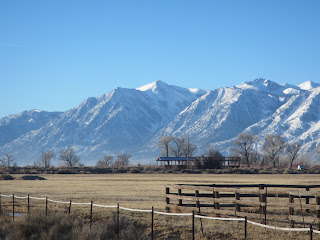 I knew soon as I got in my car that I would not make it to Williams, Arizona that night. That was my plan, Williams by 6 PM. But I had made that plan while sitting in my kitchen at home in Oregon. Not in a hotel parking-lot off of Hwy 395 in Carson City, Nevada. In Carson City, Nevada, Hwy 395 is an unremarkable road. Pitted with strip malls and Starbucks. McDonalds. Walmart. But look behind those ugly blocks of concrete and glass - look east and west - and you see towering mountains covered in sage and snow. I had arrived in Carson City at night. Gliding down the mountains into Reno's sea of lights and then on into the state's capitol, not knowing. Not being able to see.

But in the morning I saw. And I knew—I would not make it to Williams, Arizona that night. 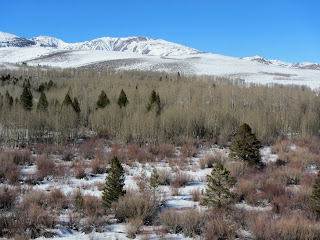 The sky was too blue to make so many miles. The sun too warm. There were hotsprings to be bathed in, and points of interest to stop and read, and so many other places to see. I have been wanting to see Mono Lake for about 26 years. Every since I read one of my favorite books, Cadillac Desert by the late Marc Reisner. If you live in the west - Cadillac Desert is a mandatory read. Period. It is the story of water and how it shapes land and people. And in the arid west - it is the story of theft on a grand scale, and idiocy and the wild-eyed lure of ambition and greed. I could not put it down.

And delaying me even further, was all the sage I needed to collect. And rocks. At one point I found myself carrying a 20 pound boulder down a steep hill crusted by shrapnel-sharp pieces of pumice. Rocks have always been my downfall.

And then, there was Manzanar. 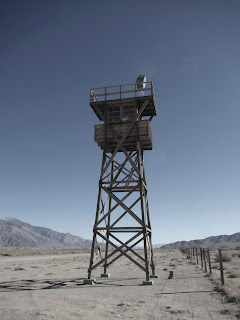 At it's peak, in 1942, Manzanar held more than 10,000 Japanese Americans. Did you know that only West coast Japanese were "interred" in these camps? East Coast Japanese, Midwest Japanese, Southern - they could all stay put. I learned that yesterday. Of course, the west coast is where most Japanese had made their home - still. Also this: when considering whether to "relocate" the Japanese, government officials also considered imprisoning Germans and Italians. That idea lost ground when one politician pointed out how unpopular imprisoning Joe DiMaggio's parents would be to baseball fans across the country. Interestingly, 300 Italians were carted off to one of those camps. DiMaggio's parents were not among them. One more thing. Do you know there is an ongoing debate about whether it is appropriate to call the ten prison complexes built to hold these Japanese American families 'concentration camps'? The government's preferred nomenclature is "War Relocation Centers." As if war were a hurricane that had swept away these people's lives. 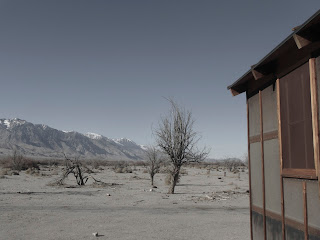 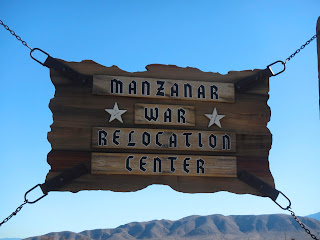 Anyway, I went to the museum and walked around and spent far too little time at Manzanar. The place needs a minimum of a day to explore. Most of the buildings are gone, but ghosts hang out there. I could hear them walking over the brittle cottonwood leaves. I found pottery shards, pieces of broken glass, old rusted cans. Each had a story, I was sure. But unlike the roadside rocks, I left them in place.

It was 3 pm, I had to go. There was still Death Valley to cross. But that is a whole other story, and I don't have time to tell it now. It is morning, and I have to hit the road. My goal: Grand Canyon by noon.  Of course, who knows what I will see along the way....