Did you watch that Elephant? It is the happiest animal on planet Earth, except for me - yesterday - hiking into the Grand Canyon with Ranger Kristi Rugg, or as I think of her - Wiki - as in Wikipedia. Her knowledge of the canyon is encyclopedic. And so, as we descended the Hermit Trail I listened and learned and asked a zillion questions. She showed me 275 million year old lizard tracks in the Coconino sandstone, pointed out Douglas Firs tucked away in shady micro-climates, and told me where I can find crinoid stems and brachiopods in the Kaibab. We talked about miners and mules and plants and paths and lightning strikes (Grand Canyon tourists come in third for lightning related deaths after golfers in Florida and those tall Texans with their ten gallon hats.) Then we talked about hypothermia and wilderness rescue and people who actually run Rim to Rim to Rim. South, North, South or visa versa, IN ONE DAY! We decided they are nuts. And we talked about The Grand Staircase Escalante Monument in Utah, which she insists I have to visit, and how we love hiking where we can see the roots of the earth. Wood walking - in Oregon - is nice, but I tend to feel I am in a green tube. But a desert hike, with its views, the sky, the chalky earth right there to be touched and seen? That's what I'm talking about.

I'm a desert girl. Born in Chicago, my home is in western Oregon - but my heart of hearts is where sky meets earth. 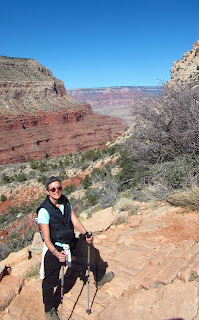 So yesterday I was doing the little elephant happy dance all the way down the trail. Well, not really. That would have been crazy-stupid. I was a good girl and hiked with both hiking polls, stayed true to the path, and was extra careful on the ice. But inside? I was doing the jitterbug.

This is where I belong.

After the hike, I spoke at the Shrine of the Ages. I chose a few of these Grand Canyon blogs and had my photos on a huge screen, and it was fun to not talk about The Crying Tree or the death penalty or forgiveness. And once again, I felt like a very happy elephant. 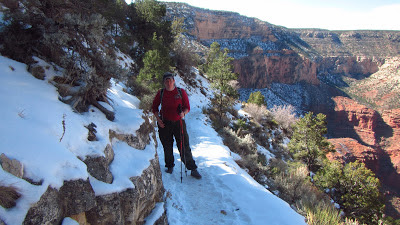 During the Q & A I was asked what I hoped to bring home from this experience and this was my answer. To remember that ultimately stuff just doesn't matter. The missed deadline, the flat tire, the illness, the broken phone, the crappy neighborhood, it just doesn't matter. Not only is life short, it is, in the scheme of things, basically insignificant. In a billion years of strata, what is human existence? A finger's thickness? Of course, I know some people disagree and think the Canyon was created about 6000 years ago by the forces of the great biblical flood. I visited a couple web sites describing this event, but I didn't hang out long. I have never been a big fan of fantasy fiction.


The bottom line for me is that that elephant has it right. Go dance in the waves. Go hike, go watch the stars or climb a tree or ski around a mountain and get lost but come out alive knowing that is who you are. We all need to be happy elephants - at least once in a while. Time is ticking away real, real fast.