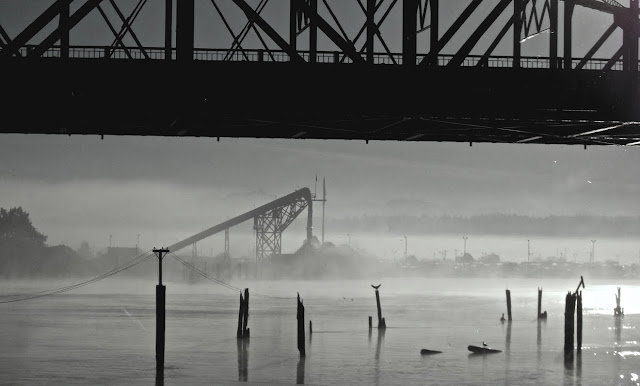 I am in a train going south from Seattle, Washington to Oregon, and this is what I see.

It was sunny in Seattle when I arrived on Friday and it stayed that way for a full 48 hours. Two whole days so cloudless and benign, each person I spoke with commented on the phenomena. Can you believe this weather? Are you enjoying the sun? Have you ever seen such a sky? Groups gathered on sidewalks, faces pointed upward. Like storks swallowing fish, they swallowed in that warm glow, trying their best to get their fill.

Piles of fishing nets, creosote ties.
Rusted bridges, grain elevators.
Canyons of containers waiting to be stacked on a barge.

And now I sigh. 'Canyons of containers.' I can not seem to get the Grand Canyon out of me. I try, but everywhere I look I am reminded of where I would rather be. Yesterday, while walking though Seattle University I ended up in a strange outdoor alcove, surround on three sides by sandstone colored walls two to three stories tall. Straight ahead was a twisted unfortunate looking tree. A piñon, I thought, knowing it could not be. A piñon in a box canyon.

When I got to the Seattle hotel, my computer began to chirp with a weather alert. I looked. I had forgotten to change my settings. It was snowing in the canyon, white-out conditions, it warned. I dropped into the chair and logged onto my web site, hit web cam and stared at the now invisible canyon. Then I looked up and out the window. I could see buildings and cars and hear the buzz of the city. I shut the gauzy curtains and imagined instead that I was looking out the window from my desk at VerKamps on the South Rim of the canyon. Snow swirled, settled in drifts. Instead of city sounds, VerKamp's old steam radiators crooned and clanked in mutiny against the cold.

This is what I think. People buy land, they get titles and pay mortgages. They stake a claim, punch in a post, build a home, erect a monument, dig a grave, and call it theirs. It is not. We can never own place. Place can only own us. And when it does, it does not let go. I belong to the Grand Canyon, or, more broadly, the Colorado Plateau, and there is not a cell in my body that is not being called home.

Sometime last night the rain returned, and with it descended something else. Melancholia. A furtive sadness. No more people just hanging around outside. No faces looking up. No one saying 'can you believe this weather?'  Because, of course, we can. Hunched backs, collars up, the blank face of resignation. There was a reason Lewis and Clark were happy to leave Fort Clatsop. They spent four and a half months on the Pacific Coast, almost every day of that time cursing the rain.

It's not that I do not like the Pacific Northwest. I love it in many ways. It has a deep and awe inspiring beauty, more progressive politics then say, Arizona, and I love the fact that I can go from the Great Basin to the ocean in one day. It is just that Oregon has always been my transitional home. I agreed to move here in 1986 under the condition that one day I would return to the southwest. I didn’t know then what I know now—those interceding years—they go by fast. Blink too long and they're gone. Which is why, I believe, I can’t get the canyon out of me. Maybe we are salmon. Maybe we are migratory birds. Maybe we are wildebeest. But the call to return to where rock meets sky is deep in my blood.

But I am not a lone salmon, not a wildebeest, or bird. I am a mother. A wife. A daughter, and each of these things keep me here, in the Northwest. It's not a bad confinement. Nothing to whine over, I know. Still, I catch myself watching the skies for chevrons of geese pointing themselves on.

A ferryboat.
An island.
Wicker-colored reeds.
A motionless heron, its feet planted firmly in the sound.