After the Oregon standoff: can lost goodwill be recaptured?

As the standoff in the Oregon desert draws close to a very American end—a barricade, a shoot out, one dead cowboy, several arrests—the conflict over western lands is far from over. 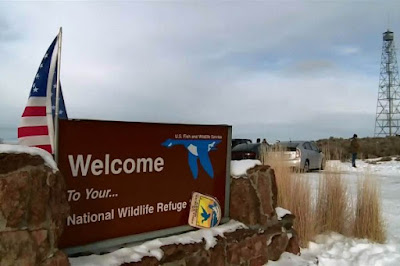 During the first week of the three-and-a-half week standoff, things were fairly amicable between the militants and local authorities. But before long, the out-of-state gun bearing cowboys were destroying property, and threatening local officials. All along, the police and FBI remained mostly out of site, not approaching the militants or commenting to the press about the situation, which left many across the country wondering what they were waiting for.
That changed on Tuesday night. As leaders were driving about 100 miles to a meeting with supporters, authorities stopped the militants on the remote snow-lined highway, and captured the group. In the confrontation, one leader, Robert LaVoy Fenicum, was shot and killed. With their leaders gone, many of the militants left the refuge, and presumably, Harney County. Still, five or six people remain, promising to stay no matter what.
Their continued resistance indicates that the sentiments which brought people to this cold and windy part of the country are not going to just blow away. While everyone may agree that public land has many meaningful purposes, it is the people who earn their living from that land that often feel left in the dust by state and federal regulations.
To them, wolf introductions, wilderness proposals, bans on timber harvest and reduction in grazing units clearly prioritize environment over livelihood. Shuttered mills and feed stores, abandoned libraries, anemic public services are perceived to be a product of an overreaching, unsympathetic and aggressively arrogant government infrastructure lubricated by urban and urbane values, rather than what it really is: a symptom of an economic system gone amuck.
For them, multiple use is often portrayed as a multiple menace, with the needs of wolves and fish and hikers competing with the needs of local people trying to feed their families.
The answer to this problem, however, is not the demonization of government nor in the privatization of land. Ironically, the answer according to Harney County rancher, Fred Otley, lies in just the kind of cooperative plans that he and other ranchers and conservationists helped create with the Malheur Wildlife Refuge and Bureau of Land Management in 2013.
The landmark effort brought together all interest groups to develop a shared vision for the land which included economic, environmental and social needs. It took more than five years of hard work, long conversations and detailed biologic assessments to complete the project.
In the end, ranchers signed a 30 year agreement with the government to protect sage grouse habitat on their private lands, in exchange for the continued use of public lands for well monitored grazing.
The cooperative effort included 53 ranches and 320,000 acres of pubic and private land. In March, Interior Secretary Sally Jewell visited Harney County, dubbing the Malheur plan, “the Oregon Way.” It and similar work in other parts of the west have been credited for the recent U.S. Fish and Wildlife decision to not list the sage grouse as endangered.
“We started saying what’s good for the bird is good for the herd,” said Tom Sharp, a Harney County rancher who helped launch the cooperative effort.
Sharp, Otley and Harney Country community members are concerned that the militants illegal occupation of the refuge and their incendiary claims that the federal government has no right to own land in the state, will derail the goodwill that has been created in the county. After generations in the area, they know how quickly misunderstandings can lead to decade long feuds.
These concerns were voiced to Bundy and his crew at a Town Hall meeting last week in Burns, Oregon. The meeting drew over 400 locals, most of whom called on Bundy to go home. At the end of the meeting Bundy and his friends got up and walked out, not saying a word to the group.
And while it appears Bundy and his gang are on the way out, their God-loving, gun-toting, live-free-or-die message is not likely to go away. The reason Bundy and other leaders were caught last night is they were heading out to meet with more than 100 supporters in the next county over. Before he was arrested, Bundy said he been invited to attend another community meeting later this week. “We have a lot of support,” he told reporters.


Unfortunately, he may be right.