The first thing I did when I got to the Grand Canyon was fall. Not into the "abyss" - or I wouldn't be writing this. My spill was in the bathroom. Actually, in the kitchen coming out of the bathroom. The apartment I'm in has two steep steps linking the rooms and I entirely forgot about them and fell so hard on my knees I thought for sure I cracked the kitchen's tile floor.

It took me about three or four minutes to get up and walk again.

Did I go straight for some ice? Of course not. I still had a ton of stuff in my car I needed to unpack. Ten trips up and down 32 stairs on knees that felt like they were inflating into something resembling the Goodyear Blimp. But I didn't want to look, so instead I just unpacked and kept on unpacking until I was all unpacked, then I got back in my car, went to Grand Canyon supermarket, and looked for Arnica.

You know Arnica. That "natural" anti-inflammatory you can pick up at almost any pharmacy or store these days?

Any store except the Grand Canyon Supermarket. They had plenty of other things you'de expect at your average grocery store—2500 people live and work here year round— and then there were the hiking polls, and crampons, sunscreen and teeshirts boasting, "I hiked rim to rim." Yet no arnica for all those people who actually survive the 17+ mile odyssey down the gorge and then, because you really have no choice - all the way back up. What they did have, though, was Epsom Salt, which is the kind of remedy my grandmother might have suggested for my knees—an iconic, old fashioned item I would expect to see sitting beside her Milk of Magnesia or Geritol.

But I had no other choice. It was Epsom Salt or nothing. I bought the salt, brought it home and then didn't know what to do with it. At first I thought I would bath in it, but then I imagined emerging from my Epsom bath looking as shriveled as a salted sardine. I didn't want that. The fall already had me hobbling like a ninety-year-old, I didn't need to emerge from my bath as wrinkled as one, too.

So instead of bathing in the stuff, I dissolved a half cup of crystals in hot water. Then I wrapped my legs in Epsom soaked towels. And I did that over and over again. After the Epsom Salt wrap, both knees got ice for a good part of the night. And today, three days after the fall, they are doing better. In fact, they never even bruised. Not even a little.

But that is not the point of this story. The point I am driving toward is that yesterday I met two women who had just hiked rim to rim. Well, rim to the same rim. They started on the South Kaibob Trail, descended nine miles to Phantom Ranch and then wound back up to Grand Canyon Village on the Bright Angel Trail. And when I say they had just climbed rim to rim, I mean they had just that minute at 3 PM, finished a hike that they had started that morning.

I guessed them to be in their early 30's. They were obviously independent, adventure seeking souls that push themselves out into the world, testing their mettle, breathing in life. Peers, I thought. I took a step in their direction, a hobbled, old-lady step that was braced by my hiking stick. Then I remembered—I'm not thirty. I'm nowhere near thirty. I couldn't go up and down that hole in one day. Not even if my knees were in good shape. Not now. Maybe not ever.

Still, I went up to them and shook their hands and asked them about their day—how was the weather down there, what did they see, how long did it take, how hard was it?

"It wasn't too bad," one said, taking a swig of water.

"Really?" They both looked surprised, as they well should be.

"But you know what works if you get achy?"

They shook their heads no.

"Yeah." The other hiker said pointing at me. "I remember my grandma used to use that stuff...."

What I didn't tell these two women is that I am planning my own hike down to the bottom of the canyon. I hope to leave once my knees are fully recovered. But unlike them, I'm not just wetting my feet in the river and coming back up. I'm going to stay a few days at a bunk house in Phantom Ranch. There is magic deep in the canyon. Real magic. Like the kind Carlos Castenada would write about. The kind that urges a person to wake up and forget all their groaning about this and that, knees, aging, expectations, life. Forget all of that and look at the river and then those walls, five thousand feet tall, 1.8-billion-year old rocks right there where you carefully, very carefully, are taking another step. 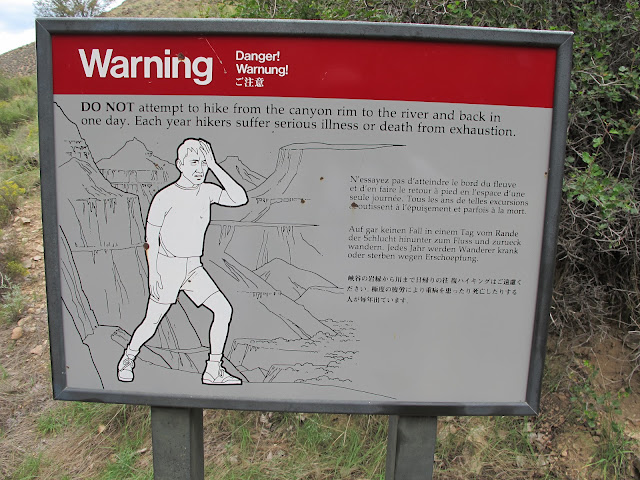