This morning I saw a young couple watching the sun rise from the edge of a cliff. The girl was giddy with enthusiasm  Clapping her hands together, skipping around to stay warm. I held my breath as I walked by. When I returned an hour later they were gone, but I was happy to see their tracks went both ways - to the edge and then back. That later part is important. Still, every year some people only make it one way. They are here on this planet alive, laughing, talking, thinking of the beauty, the wonder and then, oh, if I just get a little closer to the edge, won't that be just the greatest view in the world— 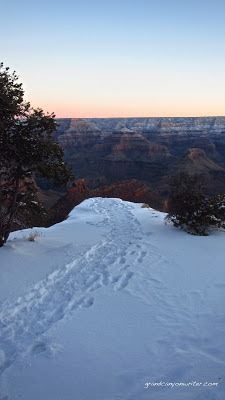 And then they are gone.

It's important to remember that the canyon is so big, so vast, so absolutely unbelievably immense that perspective is easily lost. It's hard to imagine, but good to try, that you could start at the bottom of the canyon and stack three Empire State Buildings on top of each other and they would still not be as high as the rim of the Grand Canyon. Many people fall simply because they lose their bearings. They are sitting on a ledge resting from their hike, and then they get up, get disoriented, get dizzy and fall.

Most of the deaths happen to men of a certain age. Several have been attributed to these same aged men urinating off the ledge, or walking around in the dark—drunk.

The book makes for an interesting read, and a good reminder of how indifferent this canyon is. 1.8 billion years compressed into a vertical mile of rock. What's a human life compare to that?

And for a bit more perspective, I just found this photo by Adam Shallau.