No Way to See

From my window I can see a father holding his child and pointing out at the Grand Canyon. Only there is nothing to see. Only vast gray clouds, as opaque as a woolen blanket, but not at all warm. The child is dressed in red. Red boots, red coat, red hat covering her red cheeks and nose. I'm not quite close enough to see that rosy face, but I can tell. 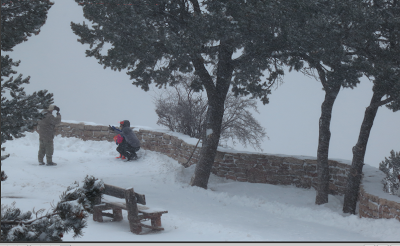 I can also tell from the father's enthusiastic gestures that he's describing what the child can not see. How just beyond that ledge is a canyon so deep you can stack three of the world's tallest buildings in there and they still will not be as high as we are right now. And how the rocks at the bottom of the canyon are almost half the age of the earth. They were formed when there was no such thing as people. No dogs or cats or dinosaurs even. The rocks down there are older than anyone will ever be. And its beautiful, this place. Beautiful like a tiger is beautiful. Like music can be beautiful. Like stars, and moonlight and warm baths on cold nights. Like the snowflakes that are falling on your face right now.

And the child laughs and wiggles free and runs in the snow. The drifts are taller than her and she hurdles herself into them. And spins and throws the cold fluffy stuff into the air and watches if fly over the rim and into the expansive white.

That's why I love the Grand Canyon. Because even when you can't see it, it is beckoning you to tell its story. To pass it on and give to your children.

Last night as I walked home in the dark, the wind was strong and the snow was blowing in great gritty waves. The canyon's chasm was just three feet away, a black void darker than night sky. Then suddenly from below there was a blast of light. I stopped mid-stride trying to it figure it out. What was that? Where did it come from? Then I realized. It was lighting—lightning beneath the rim world.

Tell that to your child, I want to run out and say to the man. Make sure to tell that story, too. How the canyon is an inverted mountainscape, and we are tiny specks at its peak. And that there is nothing like it in this world. And that one day you will bring your children out here and point and tell stories, and it will be here waiting, this Grandest of Canyons, whether you can see it or not.